The author analyses representations of the Holocaust in Czech dissident literature published as samizdat in the 1970s and 1980s. He concentrates on historical writings, but also considers journalistic contributions, memoirs, and works of belles-lettres, as well as translations of publications. In particular, the article considers two aspects that highlight the difficulties one faced and continues to face when trying to fully integrate the Holocaust into Czech national history. First, the Holocaust was often understood by the dissidents as evidence of the inhuman nature of
totalitarian regimes. This interpretation, however, led to placing the persecution of the Jews by the Nazi regime on the same level as the persecution of the Czechs by the Nazi and Communist regimes. Second, if there was a reassessment or questioning of the Czech national master narrative, then topics such as home-grown antisemitism or the Holocaust were not addressed. The dissidents admitted that Czechoslovakia also had its question of guilt, but they related it to the expulsion of the German minority after the Second World War. The Holocaust, by contrast, did not generate any similar debate among the dissidents. The behavior of Czechs during the Second World War, the attitude towards Jews, and domestic antisemitism were thus not questioned at all. The Holocaust has, according to the author, therefore tended to be overlooked or, at best, mentioned only incidentally in writing about twentieth-century Czech history – whether the authors published their texts in state-owned publishing houses or in samizdat. 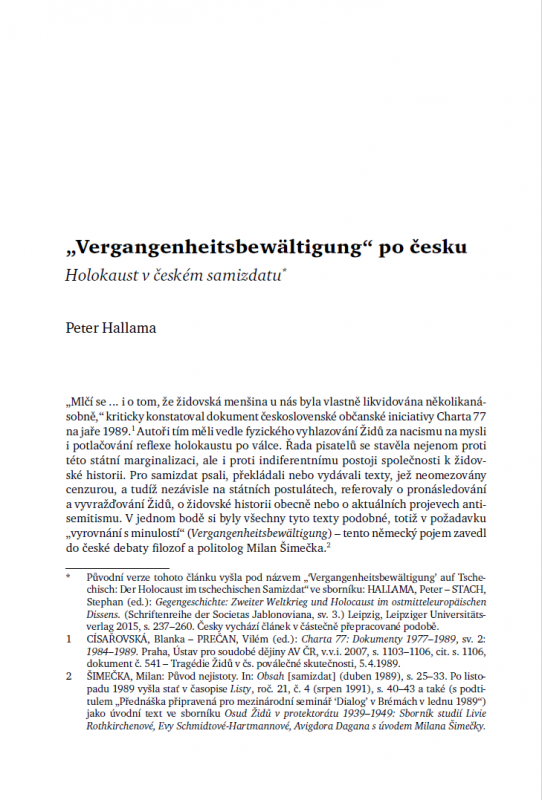